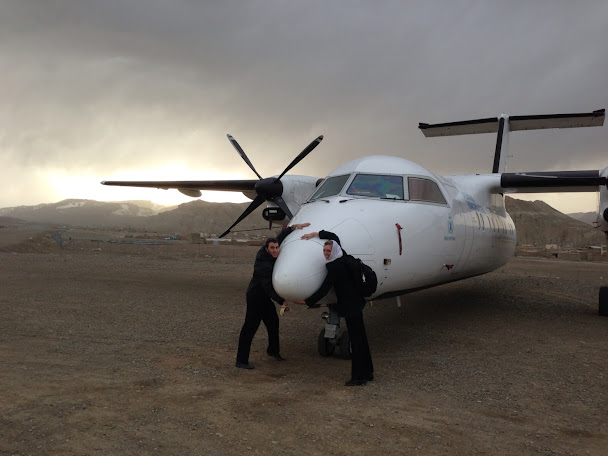 Ryan and I give the baby Dash goodnight hugs!

It was supposed to have been a short day: Kabul -> Bamiyan -> Faizabad -> Kabul, however, our plane decided to have a bit of a rest in Bamiyan, meaning it failed to function properly (The aileron tab decided to stop moving). Another plane was intended to come and rescue me, but a storm decided to hit Kabul just as they were about to depart and they cancelled the flight. To be honest, I wasn’t that upset about it because a WFP truck came and picked us up and took us out for lunch, which meant I got to see the cool little town where they have 175 ft Buddha statues (Or used to have until the Taliban blew them up). 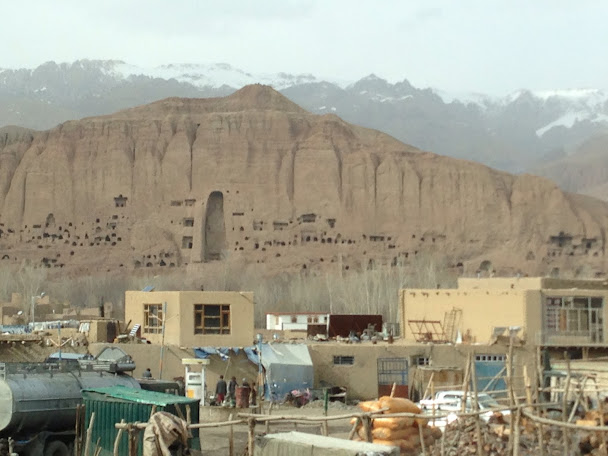 One of the demolished Buddha statues along with a collection of the caves, which are all connected by inner staircases I also got to visit the, “Disabled Store,” which is located at the side of the runway. It’s a little shop full of tourist souvenirs made by disabled people from the community. The funds go back to support the artists, which I thought was a pretty awesome idea, so I bought a sheep wool matt for my front door back at home. I might have to go back to that store before I leave and pick up some jewellery for the lovely ladies back home!

Our driver then takes us downtown Bamiyan to a hole in the wall kebab lounge where our only choices were either sheep or chicken. We ordered a pile of kebabs and they were surprisingly delish going down (a few hours later I wasn’t raving about them so much because I felt like I was dying inside). The driver then told us about his gigantic family of 1 wife, 16 children, and 20 grand children. He joked that he had to keep going because the first six babies were girls and he really needed some boys. Pretty sure this guy was responsible for creating half of the children running around Bamiyan. 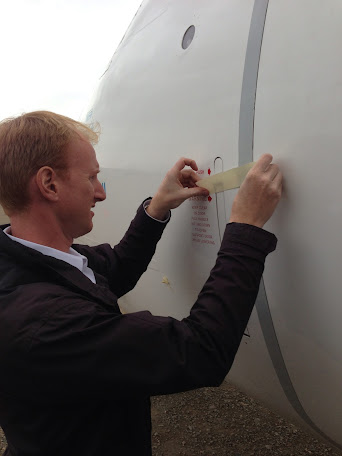 After lunch we find out that due to the terrible weather, it is too late for our engineer to arrive in order to fix the plane, and we must stay the night. We use masking tape and stickers to seal the doors as a precaution to make sure that noone tampers with the aircraft while we are gone. There are also two guards that are hired to keep watch (There is no airport security here). For a second I panic thinking that one of the guards is pointing a gun directly at me, but upon further observation I realize that he is actually holding a pigeon. He laughs at me and is keen to have his picture taken. We give them a handful of granola bars and some mango juice to ensure that they have a sugar high and don’t fall asleep on duty. 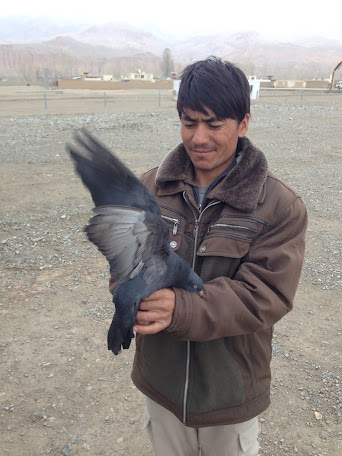 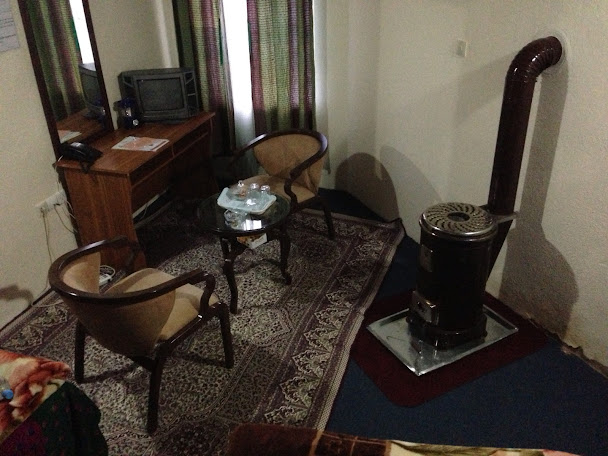 Our hotel was actually quite charming. We didn’t have very high expectations considering the town doesn’t yet have electricity and is essentially made out of dust, but surprisingly enough the hotel has WIFI powered by a generator, as well as a wood stove and tea set in each room. The only thing I wasn’t too happy about was my latrine, which was essentially a hole in the floor. I don’t think a woman was responsible for such an invention as we’re not really equipped for standing and aiming like men do. GAH!!! At least it beat the hotels in Haiti, which provided you with a bucket beside your bed for a bathroom. 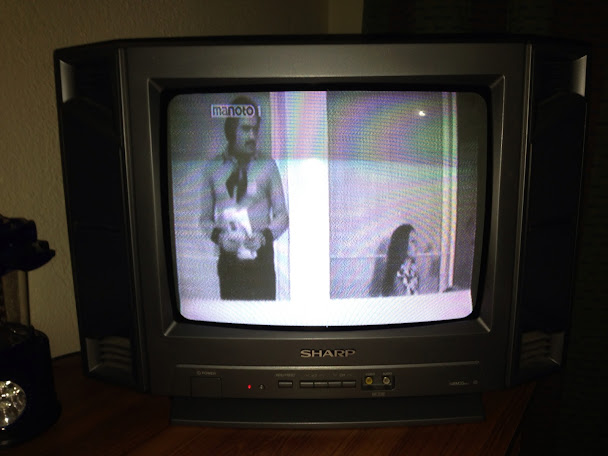 The TV in my room was very high tech! 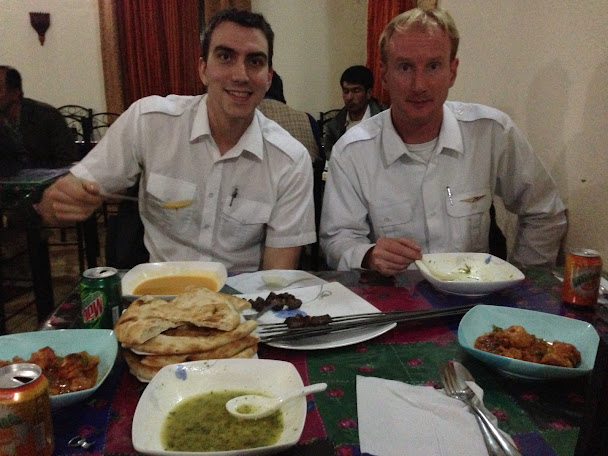 Sleeping was interesting. When my little wood stove burnt out I had to pile on about 6 massive blankets to keep warm. Then the nightmares started. I dreamt that I was running  in the middle of a war and that people were driving around in trucks throwing grenades. Only some of the grenades actually exploded (I’m guessing this is stemming from the rocket that went off at the airport. Apparently they are attacked by rockets frequently but not many of them detonate). I was wounded in the dream and came across a woman who wanted to help me. She instructed me to follow her into a house where she knows she can find an x-ray machine. The house is mostly demolished and yet we take cover inside even though there are still grenades being launched inside. Then I wake up in a panic and think it’s daylight when in actuality it is 2:00 AM. Back to sleep… 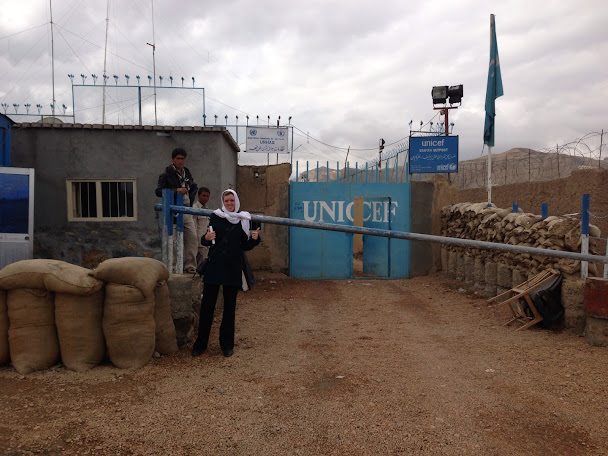 Me at the entrance to the Unicef office in Bamiyan

In the morning I feel pretty gross because none of us were really prepared for an overnight stay. In the future I am never going to leave for a flight without: a sweater, toothbrush, change of clothing, phone charger, snacks, water, and money. We then wait in the cold and rain at the airport anticipating the arrival of the King Air, which is carrying our engineer, Mike. Unfortunately, the weather is yet again making it too difficult to land and there are further delays. I’m a bit worried at this point because I had just received an email stating that there are security warnings at the airport in Kabul (hints of a possible hijacking plan) and that the airport won’t be operational until Saturday. That means that if we cannot make it back to Kabul in the next few hours, we will be staying in Bamiyan for 3 more days. No thanks! 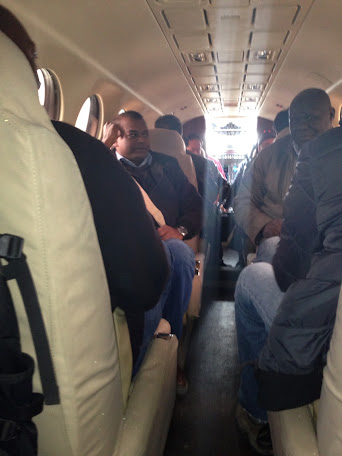 Fortunately for me the King Air arrives a few hours later, and there is one seat left available so that I can fly back with them to Kabul. Mike stays behind with the two pilots and they use duct tape to fix up the plane. I kid, they probably used magic! 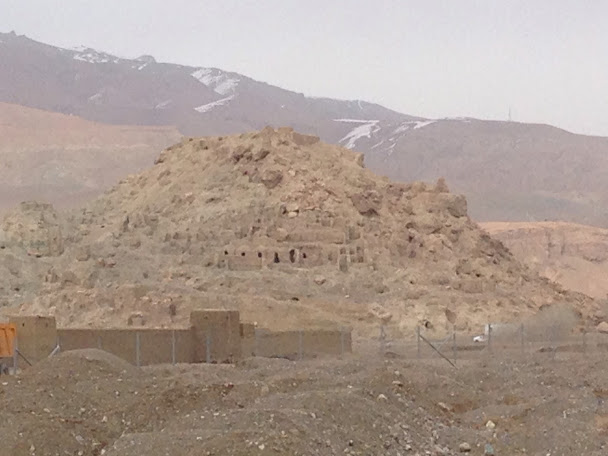 I wanted to go on a tour of this “castle” but it isn’t recommended to go without a guide as there are still possible land mines hanging about. 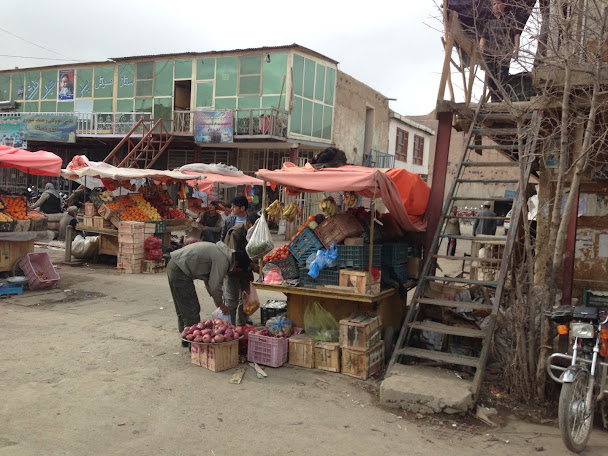 One of the many markets in Bamiyan

This entry was posted in Work. Bookmark the permalink.